The story begins on the thirtieth birthday of the main character, Conlan. He enjoys his work. He and his wife are thinking of starting a family. However, an unexpected and unwelcome visitor arrives to change their lives forever. Conlan learns that he has testicular cancer and must go through several operations to battle it. His cancer is personified as T.C., a character who sees herself differently than one might expect. "Turning Thirty, The Musical" explores the needed surgical procedures and medical tests, the support of family and friends, and even the humorous side of the struggle through song. As Conlan learns that the sword is not able to stop T.C., he struggles to save his life while trying to bring new life into the world. Join Conlan, his wife Halle, T.C., Dr. Saxon, and The Wizard in an unforgettable story.

The debut performance of the show was a staged reading presented in 2008. The show continued to develop over the next two years with two more staged readings and a concert performance. These four performances raised over $6000 for charities, and with growing audiences and standing ovations, it became time to bring it to the next level. In 2012, Willner launched a successful Kickstarter crowd-funding campaign that raised $10,000 for a professional workshop and showcase. Under the leadership of Director Scott Warren and Musical Director Michael Fauss, the show was further developed into a production ready promising new musical. On June 10, 2013, that showcase was presented at the Theatrical Outfit in downtown Atlanta to another standing ovation.

Currently, the show is being used to train nurses, social workers, case managers and other healthcare professionals about the patient experience. In addition to performances at multiple CEU accredited classes, this unique musical educational experience was presented at it's national debut in 2016 at the World Congress For Continuing Professional Development in San Diego, CA.

By Tom Willner
Like many of us or those we know, my life has been changed by cancer. Right after turning 30, I was diagnosed with testicular cancer. My wife and I had been struggling with the decision to start a family when suddenly the debate took on a new urgency. After two operations, we thought our ordeal was over, but six months later, the cancer returned. I had another major operation and many rounds of chemotherapy. Aggressively trying to beat the disease, we also struggled to bring a new life into the world. During this difficult time, I wrote seventeen songs about the experience and turned it into this musical. Here is that true story:

In 1999, days away from my thirtieth birthday, I realized that there was a small lump on my testicle. My wife made an appointment for me with a urologist to have it checked out. She knew that this was serious, but I was avoiding the issue and she knew we had to just wait until I saw the doctor. When my birthday arrived, she threw a surprise birthday party for me. So many great friends came, some from far away, that I felt like the most fortunate guy in the world. Unfortunately, several days later, at my appointment, I found that I was going to have an operation called an orchiectomy to remove the whole testicle along with the mysterious lump.

this was me at the time 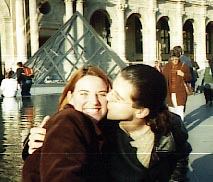 and with my wife, Allyson

It was then that I realized that I might be dealing with cancer. This realization occurred at two o'clock in the morning, and I nearly blew a gasket. I screamed, I cried, and I read. I read everything I could find on the internet about testicular cancer. My father had died two years prior of prostate cancer, and I was in shock that that I could be battling the same type of disease. Later, I found it very interesting that it took me those weeks to realize what was happening to me. There's a great line in the movie American Beauty that I find very appropriate: "Never underestimate the power of denial." How true.
I had the orchiectomy, the first surgery I have ever had, then proceeded to recuperate and stress for the next six days waiting for the pathology report. Waiting for a "verdict" for six days was excruciating. Unfortunately, the report confirmed my worst fear: I had cancer.

Technically, I had nonseminoma testicular cancer of mixed type, but predominantly embroynal. This is a particularly agressive form of testicular cancer, and it had, in fact, invaded the vascular regions. What this meant was that the tumor had the opportunity to spread. I had a CT scan of my abdomen, to see if there were any tumors in the lymph nodes there. There was one suspect mass, but it was hard to tell if it was a tumor or not. I had to make a choice about getting a major operation called a Retroperitoneal Lymph Node Disection, or RPLND. Without it, my chances of survival were about 70%; with it, more like 90-95%. However, this was major surgery. I would be cut from my chest to my pelvis, all my insides pulled out, and the lymph nodes in the back removed. Then all my insides are put back in, I'm sewn up, and I recover for a week as my body learns how to use it's digestive system again. Also, as a side effect, there was a chance that I would not be able to conceive children naturally. After a second opinion, much research, and several deposits at a fertility clinic, I decided to have the surgery.

I had the RPLND on September 1. The following week was one of the hardest times of my life. I was in serious pain but on morphine, I dealt with a Nasal Gastric (NG) tube that went in through my nose and down into my stomach, and I spent the week learning to eat and poop again. The good news: no evidence that the cancer had spread. 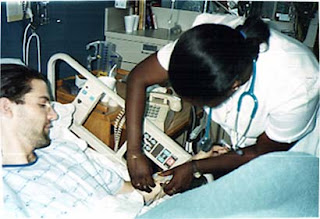 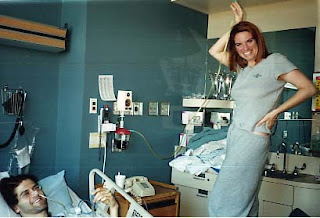 My wife, Allyson, and I showing off the worst tube of all,
the NG tube

One day, after coming home from the hospital, I got the idea for this musical. Songs started pouring out. Soon I discovered that I did, in fact, get the side effect of "lack of emission" which effectively meant I could no longer conceive children naturally. Within minutes of that discovery, however, we also discovered that my wife, Allyson, was pregnant. I began to write a journal, and I grew a full beard for the first time in my life. 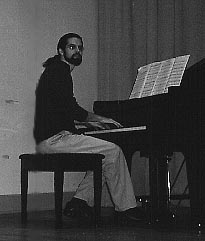 A few short weeks later, Allyson suffered a miscarriage. My life was an emotional roller coaster ride. I began to explore myself. I decided to cut off my long hair, donate it to an organization that made wigs for kids who had lost their hair due to chemotherapy, and I had the remaining hair bleached blonde. My wife said she enjoyed sleeping with this new guy. A friend of mine, in shock after seeing my new look, said that he really wanted to be around for my mid-life crisis.

Allyson and I decided to visit the fertility clinic, where we began the procedure of In Vitro Fertilization. If you've never experienced this process, suffice it to say that it is very much a medical procedure. Poor Allyson had to give herself shots (sometimes I would give them to her) everyday, some just under the skin, but some deep into the muscle. After much pain and effort, we found it was all worth it when we saw that tiny little heartbeat. Allyson was pregnant once again. I thought my cancer ordeal was over, and life was beginning anew. We scheduled a vacation with great friends to celebrate.

It had been six months since my RPLND. I had what I felt was going to be another routine follow up visit where I would get my clean bill of health, then I could head off to Greece and Turkey on vacation. What happened instead was that my doctor brought me bad news. I had a recurrence in my lung. I stared at the round mass on my CT scan pictures in disbelief. Still in shock, I talked to my urologist as well as a thoracic surgeon about my options. I wanted to know if I could still go on vacation, and postpone the inevitable operation for a week. The doctors agreed that it would be fine, and I left the clinic. I called Allyson, who was out of town, and I told her the news, sobbing. She thought I was joking. When she realized I wasn't, she hopped on the next plane home.

We scheduled the surgery and went on vacation. We did our best to enjoy ourselves, Allyson dealing with morning sickness, me dealing with my own mortality. Fortunately, we were with great friends in a great place, and we knew had no choice but to live fully in every moment we had.

We returned home, and I returned to the hospital for my lung thoracotomy, also known as a wedge resection. This time, I had a successful epidural, which is a miraculous form of pain control. I was in intensive care after the surgery with over thiry tubes coming out of my body, and I felt little to no pain. I spent the next several days recovering, and found out that the removed tumor was, in fact, a metastasis of my testicular cancer. I was introduced to my oncologist, who agreed to a three week recovery period before starting me on chemotherapy. 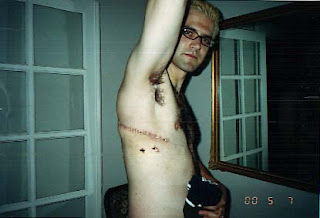 In May of 2000, I began a series of four rounds of chemotherapy. Each round was three weeks long, and consisted of BEP, or Bleomycin, Etoposide, and Cisplatin. Each one is effectively a poison, designed to kill the fastest growing cells in your body. That includes cancer cells, but is not limited to them. That is why chemotherapy patients typically lose their hair.

The first week of every round was horrible. I spent the first half of each round nauseous and miserable, losing a little bit of every sense - seeing, hearing, smelling, tasting, touching - in the process. I was taking medicines to counteract the side effects of medicines to counteract the side effects of medicines. My white blood cell count went down to dangerously low levels, such that I was incapable of fighting off infections. I had to give myself shots to stimulate white blood cell production, but I got such intense pain in my bones from it, that I had to stop and try other methods. Undergoing chemotherapy was by far the worst time of my life. I did, however, meet some of the most compassionate people I know - the infusion center nurses. I am forever grateful to them and all of the people in healthcare who devote their lives to the well-being of others.

After my first round was over, I noticed that I could easily pull out my hair. I went straight to my hairdresser, who buzzed it all off on the spot.

Before long, I was completely bald. I also lost my eyebrows, eyelashes, and almost every hair I had anywhere on my body.

I have been down a path that had changed my life. No longer do I look at things the same way. I now have a healthy respect for every follow up visit to the doctor. I realize that every single living, breathing moment is one to be savored, no matter whether it is easy or difficult, good or bad, right or wrong. The hardest moments in my life now seem to pale in comparison to the time when I was fighting to stay alive, using knives and poison. I don't know what will be the end of this story; I just hope it comes many, many years from now.

I have finished the musical. I now have three beautiful children named Klara, Elliot, and Miles. And indeed, Life is Good.

Email ThisBlogThis!Share to TwitterShare to FacebookShare to Pinterest
Home