Turning Thirty, The Musical is a new musical about a young couple who are debating starting a family and are suddenly faced with a diagnosis of cancer. 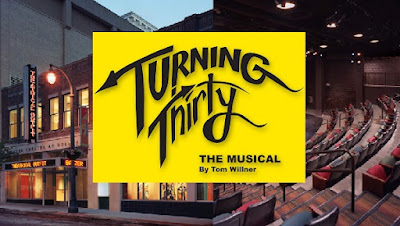 Based on the true story of Tom Willner's battle with testicular cancer, "Turning Thirty, The Musical" was first presented as a staged reading in 2008. Over the next two years, there were two more staged readings and a concert. The show continued to develop, receiving a standing ovation each time, and raising thousands of dollars for cancer-fighting charities. Willner launched a successful Kickstarter crowd funding campaign for a professional workshop and showcase, presented on June 10, 2013 to another standing ovation. He now hopes to work with a theater company to stage a full production.

“There is something really substantial here. The last song ‘I got life and life is good’ created joy in me – a precious thing to earn.” - Tom Key, Executive Artistic Director of Theatrical Outfit

"Seeing things differently is the guiding principle behind 'Turning Thirty,' which attempts to do for cancer what the Tony Award-winning musicals 'Next to Normal' and 'Rent' did for bipolar disorder and people living with HIV, respectively. Set it to music... Similarly, Willner's score packs emotional wallops along with punch lines." - The Atlanta Journal-Constitution

"The musical captures their devotion in 'I’m Here for You' as well as the surrealism of navigating cancer treatment in 'The Battle' between his doctor and cancer personified." - Atlanta INtown

Email ThisBlogThis!Share to TwitterShare to FacebookShare to Pinterest
Home